Clark pallet rider will not turn on at times, i turn the key on and can see the hour meter so have electric but when pull down the handle, do not hear the contactor and the truck will not drive forward or reverse. No codes are flashing on the controller behind the panel.
Top

A common problem is a mis-adjusted or faulty handle activation switch. When you pull the handle down, the lever must move the microswitch far enough to activate it. If it is out of adjustment, the small arm on the switch will not move far enough to the activate the switch. This switch tells the controller to turn on the main contactor. The lever mechanically release the brake. You can see this switch by opening the 2 compartment doors.

With the key off, you can actually hear the switch work as you move the handle. To test it with a multimeter, set the meter to ohms and put one lead on either of the 2 switch terminals and the other meter lead on the other switch terminal. With the handle released, the meter should show an open circuit ( OL ). 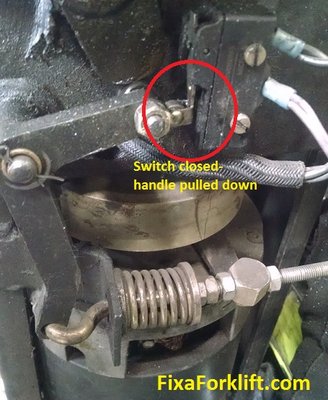 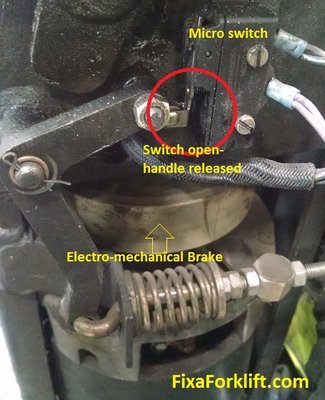