We have a Mitsubishi model ESR23N2 reach truck with a code 2203 on the display at time. The forklift stops working when this warning light code comes on. It was stuck in the middle of warehouse isle one time and we had to cycle the key several times for the code to go away and get the unit to work again. It almost seems to happen when lifting to a certain point. This is intermittent. If we lift 2 or 3 feet it will happen, other times have to go a lot higher. Turning key off and on will not always clear the code 2203 but usually it will then the truck runs fine.
Top

We are seeing code 2203 more on the Mitsubishi model ESR23N2 and Jungheinrich model ETR trucks. There could be several circuits that are effected. The key ti determine which circuit is to get the last code number after the 2203. This is called the subindex. The only way to get that is to have the Jungheinrich software on your laptop and look at the code fault code list. It would be something like 2203 16, or 2203 17. Only the first 4 numbers will show on the display panel.

This code is normally caused by a common problem they are having with the wiring harness going over the ,main lift cylinder. Inside the insulation there are many wires. Wires for height sensors or even the camera out on the fork. The best way to check for this is to use the lift function and look for the code to pop up or the camera to go out. You should see this happen at about the same height. Grab a hold of the harness and move it around and the code will come and go. It this is the case, that harness will have to be replaced. It costs about $1,200.

We have a Mitsubishi ESR23 that wont move and an error code 3167 on the display. The truck turns on, goes through its initialization, but then the code pops up and a triangle warning light comes on the display with the error. It wont move and none of the hydraulic functions work.
Top

Error code 3167 on the display of a Mitsubishi ESR or Jungheinrich ETR reach truck is usually a problem in the steering motor proximity position sensor circuit. Open the access door and watch the light on the sensor. Turn the truck on. Even though the light will go on and off when the steer motor gear trigger passes the sensor, that does not mean it is function properly. See pic below.

To get the truck running again and clear error code 3167, unplug the steer sensor for a second. Then reconnect and turn the key on. The reach truck will usually function normally now.

There is really no way to test the sensor unless you have the software to watch the live data.

To replace it, first make sure the sensor is over one of the steer gear flats and use a feeler gauge to measure the gap. Loosen the lock nut, remove the sensor and adjust to the same gap. I have had one that acted up again a few weeks later and code 3167 came back. Ended up replacing the sensor harness on that one as well. 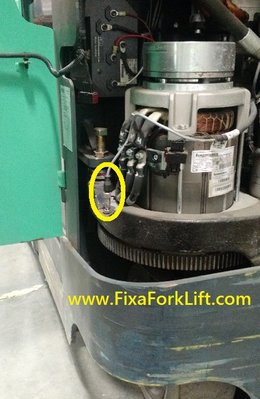