Our warehouse has a 5000 lb. Caterpillar electric forklift new model with fault code H1 on the display and none of the hydraulic functions operate as soon as we turn the key on. The truck wont even drive in forward or reverse. It just happened all of a sudden. We disconnected the battery but that did not help. The code H1 come up on the display as soon as the key is on and cannot hear any of the motors turn on when sitting in seat and buckling seat belt. What does code H1 mean and is it expensive to fix?
Top

H1 fault code on your Caterpillar refers to the lift valve switch #1. A problem in this switch will stop all hydraulic and traction functions until the code is gone. This is just your typical microswitch. The lift valve has 2 switch- one for up and one for down. Be sure to test the right one. Just test it like a normal switch with an ohm meter- 0 ohms closed, infinite when open.

You can test it right at the switch terminals, or even better at the main controls harness connector. You would need a wiring schematic to test the correct wires. This way you rule out a wiring problem between the main harness and the switch.

On the Caterpillar 5,000 pound model EC25N, along with there being a code h1, there is also an H2, h3 and H4 fault codes. In order- lift switch, tilt switch, auxiliary #1 and auxiliary #2 on a four function hydraulic valve system. Any of these codes on the display will stop all hrdro and traction functions.

I actually had a truck that had all four codes on the dash- cycling through any tme the key was on. It turns out that one of the operators spilled some soda down into the controls and all four switches were stuck in the close position. When the controller sees this at key on, it showed H1, H2, H3 and H4 on the display. I just sprayed out the switches with brake clean and gave them a shot of WD-40. Worked great. 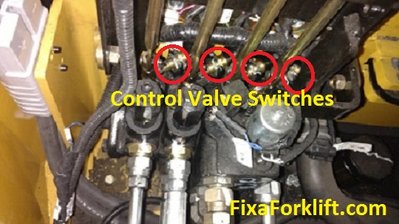